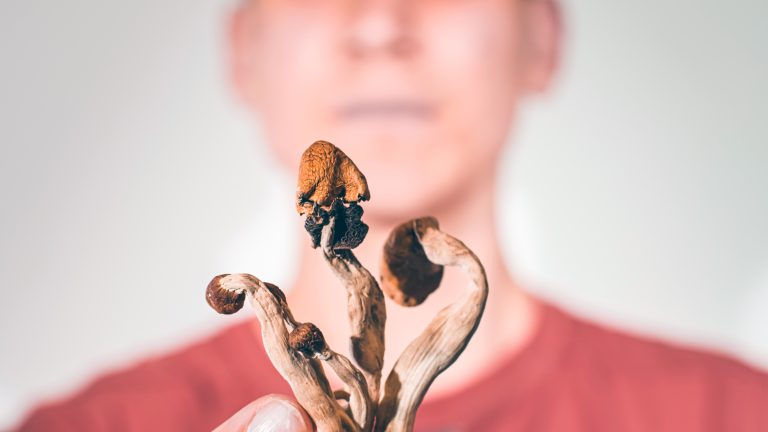 It is reasonable to wonder if mushrooms are addictive. Some people assume that mushrooms have no addictive potential since they have different effects from other recreational drugs. However, the answer is the same as with any other substance or pleasurable activity. All of them can potentially lead to addiction. When people come to depend on a substance or activity for its effects and begin to crave them all the time, priorities can become skewed and life can change for the worse. Psilocybin mushroom usage can lead to a spiral of addiction, especially when a person is drawn to them as a way of escaping from their life. Once a pattern of substance abuse with shrooms has set in, it is critical to get help.

Sometimes known colloquially as shrooms, but more frequently just referred to as mushrooms, psilocybin mushrooms are a specific species of mushroom. They are generally grown in Mexico, the United States, and South America. Unlike the mushrooms commonly sold in restaurants and grocery stores, these mushrooms contain a psychoactive compound: psilocybin. As such, this type of mushroom is classified by addiction experts as a hallucinogenic drug. When taken, psychedelic mushrooms produce a wide range of mind-altering effects. These include hallucinations, cognitive changes, memory alterations, and mood fluctuations. Recreational drug users consume mushrooms with the aim of experiencing these effects. Psilocybin shrooms have been around for thousands of years. In fact, anthropologists recognize that hallucinogenic drugs like mushrooms have a history of being used among indigenous communities, especially during important religious ceremonies. However, this drug was not widely known in the broader world until the 1960s, when the hippie movement made psychedelics and other hallucinogens popular. At this time, a number of substances, including perote, LSD, and dimethyltriptamine made names for themselves. People consume mushrooms in multiple ways. Some simply eat them directly, while others crush them and brew them into tea. Some enterprising drug dealers sell them on the street in capsule form. Whether they are fresh or dried, mushrooms are effective. After taking mushrooms, recreational drug users can expect to notice effects somewhere between half an hour to two hours later. This high can vary in length, but it generally lasts somewhere in the range of the three to six hours. The primary factors that determine the length, quickness of onset, and intensity of the high are the dosage and the metabolism of the user. Some people choose to take enormous doses, especially when they are craving an altered sense of time, visual and auditory hallucinations, and “trippy” distorted thoughts. Many people claim that mushrooms provide a sense of euphoria and relaxation – and some even believe that their thinking deepens or “transcends” worldly concerns.

Part of the reason people dismiss mushrooms and assume they are risk-free is that they are “natural.” Just because psilocybin mushrooms grow in the ground and are naturally occurring in nature does not mean they are safe, however. After all, there are countless species of mushrooms that are so poisonous that they will kill you if you even consume a little. Psilocybin mushrooms are extremely powerful and for this reason very dangerous. Taking mushrooms even once, especially if the dose is strong, can have a major long-term impact. When people take mushrooms repeatedly over a long period of time, significant psychological and emotional damage can result. Some people report experiencing symptoms of psychosis. When this occurs, the individual may begin to periodically suffer from paranoia and hallucinations even when they are completely sober. The delusions and hallucinations that people experience while high can be so disturbing and powerful that they experience flashbacks years later, constantly re-experiencing their “trip.” In this sense, it is helpful to think of the mushroom high as you would think of any potentially traumatic event. Indeed, hallucinogenic mushrooms can indeed be literally traumatic. While people generally take shrooms to feel good, the effects can be unpredictable. There are times when people will experience a “bad trip.” During a bad trip, a person on mushrooms will not experience euphoria or relaxation. Instead, they will have strong feelings of being in danger, suffer from paranoia, and be consumed by dread – much as they would if they were having a nightmare. Due to the mind-altering effects of this drug, recreational drug users may mistake their nightmarish experiences for reality. Later on, they may remain scarred by the consequences of their bad trip, and flashbacks are common. It is important to recognize that bad trips can occur with all psilocybin mushrooms. They are not caused by poor quality drugs. There is also nothing a person can do to prevent them. They are simply one of the many risks people take when ingesting shrooms.

Young people often claim that psilocybin mushrooms do not lead to physical addiction. At this time, not enough research has been conducted for anyone to confidently make the claim that mushrooms have no physically addictive qualities. However, what we do know for certain is that all substances, including mushrooms, can lead to psychological dependence. Being addicted to something psychologically can be just as terrifying and damaging as a physical addiction. When people are addicted to hallucinogens like mushrooms, they often feel that they require these substances to feel happy or good about their lives. A number of factors can influence whether a person does or does not become addicted to hallucinogens. People who have been taking them repeatedly over a long period of time are the most vulnerable. However, dosage is also a critical factor. No matter how an addiction develops, however, what matters is that a person gets help once it has taken hold.

When people consume shrooms, they experience a wide range of physical effects that they are not necessarily seeking out – some of them dangerous. Some of the more common physical side effects of magic mushrooms include: It is commonly assumed that the “high” of mushrooms is the primary psychological effect, but there are also other side effects that affect thinking, mood, and mental states. These psychological symptoms of mushroom abuse include:

The term “gateway drug” refers to a substance that causes people to abuse other substances. The implication of the term is that it will lead specifically to stronger, more dangerous substances. Substances commonly known as gateway drugs include alcohol (because it removes inhibitions and leads to risk-taking), marijuana, and nicotine. There is significant debate about whether mushrooms constitute a gateway drug. While mushroom use might not directly lead to the consumption of other drugs, it can change how people perceive drug use in general. Since mushrooms are illegal, people who consume them and have a good time might assume that illegal drugs in general are safe to use. Others may simply assume that mushrooms, as natural plants, are inherently safer than more artificial products like crystal meth and heroin. For this reason, young people are more likely to experiment with taking magic mushrooms.

Getting Help for Mushroom Addiction in Los Angeles

If you or your loved one is suffering from mushroom addiction in Los Angeles, California, it is critical to get help and support. Design for Recovery is a sober living home located in West Los Angeles. As a structured sober living home for men, we recognize that when people are working to quit drugs or alcohol they require a great deal of backup. We not only provide structure and goals for young men, we ensure they hold themselves accountable and start developing their characters. While living in our safe, comfortable, and luxurious home, they have the opportunity to begin new jobs, get back into school, and reform their lives. At the same time, young men in our Los Angeles sober living house develop new friendships and build strong social support systems – so that they can face the daily challenges of sobriety together, rather than alone. If you are ready to escape the vicious cycle of psilocybin mushroom addiction, reach out to Design for Recovery today.

Psilocybin are naturally occurring psychoactive compounds that are found in certain types of mushrooms. These compounds are known to produce psychedelic effects when consumed. Psilocybin has been used for centuries by various cultures for religious and spiritual purposes. In recent years, psilocybin has gained popularity as a recreational drug. Psilocybin-containing mushrooms are typically eaten dried or fresh. Psilocybin can also be produced synthetically in the laboratory.

There is no evidence that psilocybin is addictive. In fact, there is some evidence to suggest that psilocybin may actually help treat addiction. A study published in the Journal of Psychopharmacology found that psilocybin can reduce cravings and increase abstinence in people with substance abuse disorders.

There is no definitive answer to this question as it largely depends on the individual. Some people may find that they develop a tolerance to shrooms relatively quickly, while others may not feel any effects after repeated use. There are also a variety of other factors that can affect how addictive shrooms are, such as frequency of use and dosage. Generally speaking, however, shrooms are not considered to be very addictive.

can magic mushrooms kill you?

No, magic mushrooms can not kill you. However, they can cause you to experience intense and potentially dangerous hallucinations. If you consume magic mushrooms while alone or in an unsafe environment, you could put yourself at risk of serious injury or death. Therefore, it is important to be aware of the potential risks before consuming magic mushrooms.