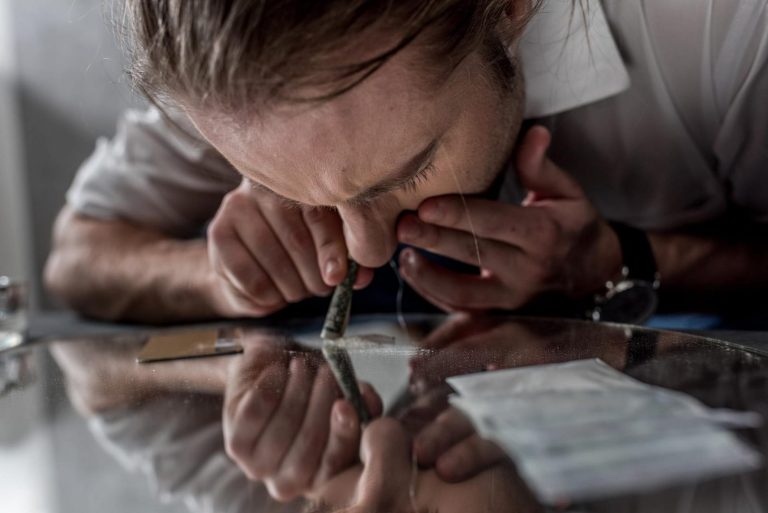 Percocet is a commonly utilized prescription painkiller. It is part of a class of drugs known as opioids, which include heroin and oxycodone. Prescription opioids like Percocet can be very effective in the treatment of moderate to severe pain.

However, they also come with a wide range of risks, including addiction and life threatening overdose. Percocet contains the opioid oxycodone, which is known as one of the most addictive opioids on the market. It also contains the over-the-counter (OTC) painkiller acetaminophen (Tylenol), which is not an opioid but can lead to health complications when misused.

Percocet is not only a widely prescribed opioid painkiller, but it also enjoys wide popularity as a street drug. Whether an individual has a prescription or not, Percocet is ripe for abuse. One of the most common — and dangerous — forms of Percocet abuse involves snorting Percocet.

Why Do People Snort Percocet?

The oxycodone in Percocet, like many opioids, can quickly cause people to develop a physical dependence. Individuals taking Percocet may not have any intention of abusing the drug — they may see themselves as people who would never take recreational drugs.

However, the relief they get from Percocet, as well as the accompanying feelings of euphoria, can be hard to resist. Like other opioids, the oxycodone in Percocet is not only a painkiller but also produces a powerful high.

When opioids like Percocet activate opioid receptors in a users’ brain, they block pain signals while also releasing large quantities of dopamine. Dopamine, a neurotransmitter that plays an important role in the brain’s motivation and decision making centers, is responsible for the strong feelings of pleasure that people experience when taking Percocet.

The high quantities of dopamine released by Percocet cause the drug-taking behavior to be reinforced, effectively hijacking a person’s brain.

Over time, people develop a tolerance to the effects of Percocet. Once the body has adapted to the drug, an individual must take higher or more frequent doses in order to achieve the same effects. This is likely to further increase their physical dependence on Percocet.

At the same time, individuals with a physical dependence on Percocet are likely to begin suffering from opioid withdrawal symptoms when they stop using the drug. Combined, these factors drive people to find new ways of getting Percocet into their body more effectively.

Many people begin by taking Percocet orally, but once a tolerance develops, snorting Percocet can become an appealing alternative. Non-oral routes of administration, including snorting, smoking, and injecting, can make Percocet more effective for recreational purposes. Snorting oxycodone means that the drug enters the bloodstream more rapidly, which causes a more intense high at a much faster rate.

For individuals taking Percocet orally as prescribed, it can take over an hour for the effects to set in. Individuals snorting Percocet, however, can often experience initial effects in under 15 minutes. What makes snorting Percocet dangerous is that it increases the risk of overdose, as well as other health complications.

What happens after a U15 Pill Snort?

Since it is also widely referred to as the U15 pill, snorting Percocet is called the U15 pill snort. Snorting Percocet is dangerous and can have serious short-term and long-term effects. In the short term, snorting Percocet can cause severe respiratory depression, a decrease in heart rate, confusion, dizziness, nausea, and vomiting.
Snorting Percocet also increases the risk of overdose since the drug can enter the bloodstream more quickly and increase the risk of respiratory failure. Long-term Percocet use can seriously affect an individual’s physical and mental health, regardless of how it is consumed. It is easy to get addicted, even for those to who a doctor prescribed the drug as a painkiller.

Percocet is a prescription drug sold in the form of a pill. This pill is meant to be taken orally, i.e. swallowed by mouth. Percocet tablets and pills are available in a range of dosages. The level of acetaminophen (Tylenol) is consistent at 325 mg, but the quantity of oxycodone hydrochloride varies considerably, ranging from 2.5 mg per Percocet tablet to 10 mg in a single dose.

When individuals are prescribed Percocet, most people begin using the drug as prescribed. However, after some time, many people who started off taking Percocet orally progressed to snorting their Percocet tablets. In order to do so, they must grind the pill down into a fine powder.

Misusing Percocet by snorting causes the effects to occur more rapidly, and it also reportedly increases the strength of the “high.” In many cases of Percocet abuse, individuals swallow one pill and snort another, which results in two overlapping “highs.” American addiction centers report that this consumption trend is common with most prescription drugs.

The United States is currently facing an opioid epidemic, due to the addictive nature of opioids and how frequently they are prescribed. While prescription opioid painkillers like Percocet are effective for treating pain, abusing these addictive drugs can lead to a wide range of severe negative consequences.

Percocet abuse can claim lives. In 2017 alone, prescription opioids led to over 17,029 fatal overdoses. Even individuals who do not overdose, however, are likely to experience a severe reduction in their quality of life. Snorting Percocet dramatically increases these risks.

Health risks from snorting Percocet include:

Given the above risks, one may be tempted to ask: why don’t people just stop? In fact, individuals who are addicted to Percocet often have a strong desire to stop, but as soon as they do they face agonizing opioid withdrawal symptoms.

These symptoms can be so severe that individuals may find themselves unable to quit Percocet using their own willpower. Getting support during and after the opioid withdrawal process is essential. The dangers of snorting prescription painkillers include developing a long-term drug abuse habit.

When an individual develops a Percocet addiction through snorting Percocet, they are likely to continue experiencing strong cravings for opioids even if they successfully withdraw from Percocet. This condition, known as opioid use disorder, is a legitimate mental health condition that causes people to be unable to control their opioid abuse no matter what the consequences are.

After developing a Percocet addiction, people prioritize their drug use above all else. It is common for individuals with opioid use disorder to isolate from friends and family, lose their jobs or drop out of school, and suffer from severe legal, financial, and health problems. More often than not, to achieve temporary relief from these disastrous life events, they will simply snort more Percocet.

Just as people often progress from taking Percocet orally to snorting Percocet, it is also common for people who snort Percocets to seek even more potent ways of getting their next “fix.” Individuals who misuse and abuse their prescription opioid prescriptions are likely to turn to other opioids, including cheap and widely available “street drugs” like heroin.

In fact, more than 80% of heroin users began by abusing prescription opioids painkillers like Percocet. Many of these people would never have imagined that they’d end up addicted to heroin, but it is a natural step after snorting Percocet.

It is important to recognize that opioid use disorder is a progressive condition. It can progress from swallowing too many Percocet pills, to snorting Percocet, all the way to heroin. Heroin use itself can progress from smoking and snorting to intravenous injection. As opioid addiction becomes more severe, so too do the consequences. At the same time, it becomes more difficult to recover.

The only way to truly stop the progression of an addiction is to receive professional help. People who snort Percocet should seek immediate treatment to minimize their risks and maximize their chances of a successful recovery.

Opioid use disorder is a treatable condition but requires a comprehensive, individualized approach that includes medication-assisted treatment, counseling, and lifestyle changes.

Recovering from Percocet Addiction at Design for Recovery

Few people can quit Percocet using their own individual will power once addiction has set in. Design for Recovery, a sober living home located in West Los Angeles, offers young men an opportunity to recover from Percocet addiction in a supportive and structured environment. Residents at Design for Recovery develop a strong sober support system consisting of other young men with shared experiences and a shared commitment to recovery.

They work daily to develop the skills and coping tools they need to avoid relapse. Moreover, at Design for Recovery, we believe that physical abstinence is only half the battle. We support residents as they work to rebuild their lives from the ground up, developing new lives that are happy, joyous, and free.

If Percocet is controlling your life or a loved one’s life, reach out to Design for Recovery today.

The half-life of Percocet is 3.5 to 4.5 hours, meaning that it takes approximately 17 hours for the medication to be completely eliminated from your system. However, this varies depending on a person’s age, weight, metabolism, and other factors.

What are the side effects of Percocet substance abuse?
The side effects of Percocet addiction can range from physical and psychological symptoms to social, legal, and financial consequences. Common physical symptoms include changes in appetite, weight loss or gain, fatigue, constipation, nausea, and sweating. Psychological symptoms include extreme mood swings, cravings for the drug, difficulty concentrating, paranoia, and depression.
Can frequent Percocet consumption lead to opioid use disorder?
Yes. Frequent Percocet consumption can cause dependence, tolerance, and addiction and lead to opioid use disorder. People who begin by taking too many Percocet pills are at risk of developing an opioid use disorder associated with various physical, psychological, social, legal, and financial problems. Therefore, it is important to seek professional help as soon as possible if you or a loved one is struggling with Percocet addiction.
Sources: