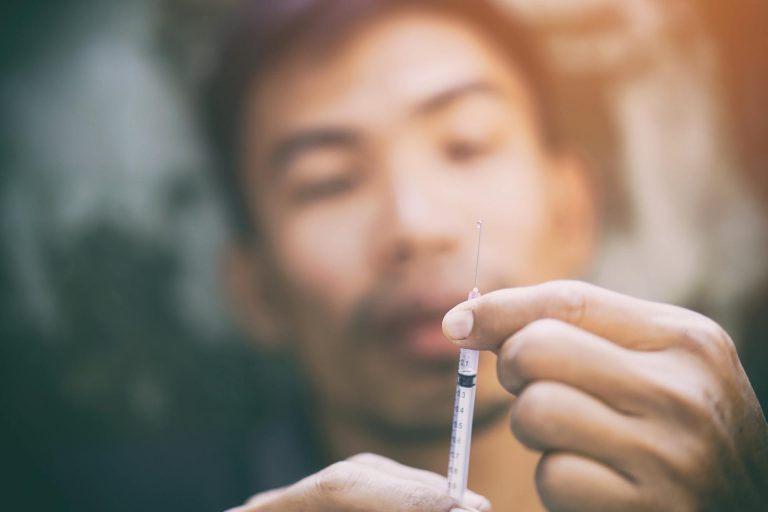 It is most often sold and consumed in the form of “crystal meth,” which usually takes on the appearance of tiny blueish-white glass shards. These shards can be smoked, snorted, swallowed, and injected.

Like amphetamine, a commonly prescribed drug for treating attention deficit disorder, meth works by stimulating the central nervous system, providing users a feeling of euphoria and boundless energy. However, unlike amphetamine, methamphetamine is far longer lasting and has more toxic effects.

According to the National Institute on Drug Abuse, in 2017 approximately 774,000 people in the United States reported using meth in the last month. Since this statistic is based on people self-reporting, the actual number is probably much higher. What causes such a large number of people to be addicted to methamphetamine? For meth users, the answer might be simple: they enjoy the high and are afraid of the withdrawal symptoms.

But the more scientific explanation for their chronic methamphetamine use is that meth releases large amounts of dopamine in the brain.

Dopamine is a chemical that is responsible for the reinforcement of rewarding behaviors. By releasing this substance in the brain’s reward areas, the brain strongly reinforces drug taking behavior, making it extremely likely after even one exposure to the drug that the pattern will continue.

The short term negative effects of methamphetamine abuse are similar in some ways to the effects of other stimulants, such as amphetamine and cocaine. The first of these is increased wakefulness and physical activity. Certain vital stats like blood pressure and body temperature tend to rise, and users taking meth might also notice that they are breathing faster and that they have a more rapid (or even irregular) heartbeat. Appetite also tends to decrease.

Some of the long term effects of methamphetamine abuse stem directly from the short term ones. One result of chronically blunted appetite is that meth addicts tend to suffer from extreme and often dangerous weight loss. A dental phenomenon known as “meth mouth” can also occur, which is a severe rotting of the teeth. Some addicts experience intense itching, which over time can lead to skin sores from endless scratching.

Methamphetamine permanently damages the brain’s dopamine system. Even after a year or more off meth, former addicts often suffer from reduced coordination, impaired verbal learning, and problems with emotion and memory. One recent study found that they are more susceptible to neurological problems such as Parkinson’s disease as well.

Methamphetamine abuse can lead to overdose. This can be fatal. Because stimulants such as methamphetamine overwork the body, the most common cause of death associated with the substance is multiple organ failure. Addicts can suffer from a stroke, heart attack, or other organ problems.

Symptoms of a methamphetamine overdose include:

However, the extent of organ failure that methamphetamine overdose causes can be difficult to determine. Often multiple organ problems need to be treated, which is why it is important to get an overdosed addict under medical care right away.

There are currently no medications that help addicts deal with the toxic effects of methamphetamine or help them to discontinue use. According to the National Institute on Drug Abuse, the most effective treatments for methamphetamine addiction are behavioral therapies such as cognitive-behavioral therapy and contingency management interventions.

Cognitive-behavioral therapy involves changing thinking patterns that are fundamental to the way people behave. Contingency management interventions involve providing tangible incentives in exchange for remaining abstinent from meth for a period of time. Combining these two therapies with counseling, education, life interventions, and 12-step programs has been shown to be very effective in reducing methamphetamine misuse.

Many of these therapies and treatment modalities are bundled together in residential programs available at rehabs and outpatient treatment centers.  Most sober living homes can refer out to these programs if needed.  Such programs are available throughout the United States and offer addicts valuable time to recover in sober environments. For many methamphetamine addicts, these programs offer a second chance at life.